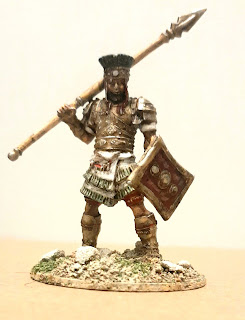 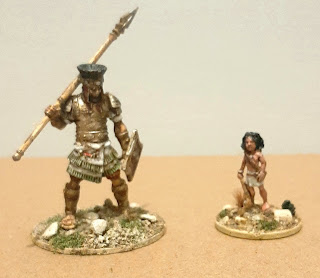 After a change in personal circumstances I thought I had given up figure hobby permenantly. However after selling off my entire collection I decided to make a small comeback. I found this amazing Goliath figure from Lucid Eye. Glad I kept the boy David conversion. I will be redoing The Hebrews and Philistines in 28mm for Chariot Rampant.
Posted by Ramases at 13:38 No comments: 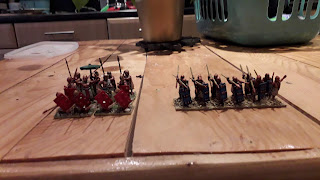 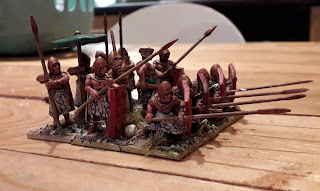 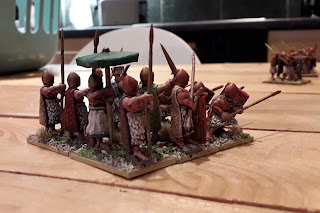 Just finished this very fine Sumerian spear unit. I have based in 2 per stand to allow more flexible use. Rather than usual Impetus style I have gone for 3 rows which I think looks very effective as a spear block when only using 12 men. Usual Army Painter wash. Other unit seen for comparison is from Newline Designs. The CP Miniatures. Really stand out. Chariot Rampant will be visiting Sumeria soon.
Posted by Ramases at 07:20 12 comments: 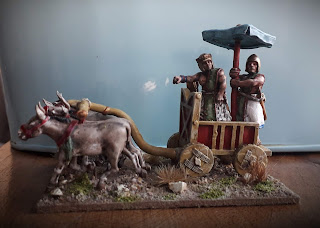 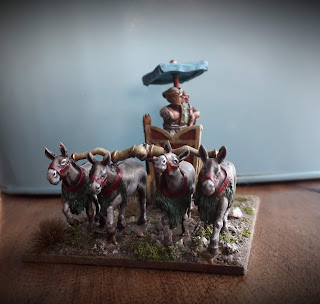 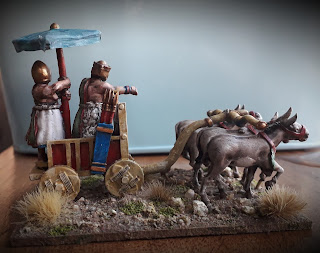 Here is a rather imposing Sumerian King. Part of new 28mm range from CP Miniatures. These are also done in 15mm by Museum Miniatures.
Posted by Ramases at 07:52 13 comments: 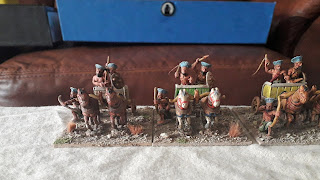 More shots of the defeat of the Philistines. A tough fought battle that ended in slaughter.
The battle opened with a dual between Goliath David. As in the biblical story Goliath on this occasion suffered a deadly sling shot between the eyes. Dice throws allowed the Philistines to pass all courage tests and continue the battle.
The Ark gave a +1 to courage like a general. Fighting on a small table and multi basing meant a lot of units were in range of King and the Ark giving +2 courage. However the Hebrews rolled high anyway. Probably the site of Goliath being killed by a boy was enough to convince the Hebrews divine intervention would win the day.
The chariots came in close and were shot up badly before they could do any harm to the Hebrews. The Hebrew forces were light spear ×2. Spearmen ×1. Ferocious warrior×1. Expert spear(King Saul). And 2 skimishers to represent the various Israelite tribes.
Posted by Ramases at 13:20 6 comments: 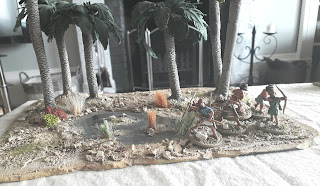 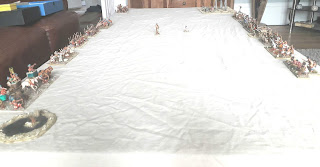 Hebrew skirmishes fire deadly volleys into the 2nd chariot squadron. Luck and support from another unit of light javelinmen slaughtered these conifdent  troops.

The Philistine chariots prepare to ride down some Hebrews. Underestimating their foe they retire from the field without striking a blow. The Hebrew light javelin tore through their ranks.
Posted by Ramases at 12:59 2 comments: 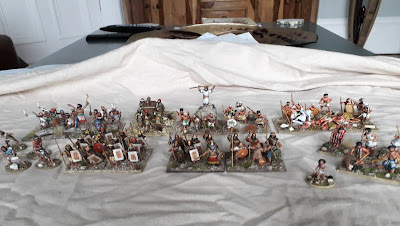 I have put together this force for Biblical Rampant 24 points. Ark is not included in points. This is representing an army of king Saul(front right unit). Boy David is front right.
Posted by Ramases at 03:23 7 comments: